By acting on our creative opportunities, we take our fate back into our own hands. Such is the meaning of the Spider (High Priestess) card in the Animal Wise Tarot deck.

Fate. I usually resist that concept. One is fated for something. Has no choice in the matter.

Acting on creative opportunities to take fate back into my own hands puts a different slant on it.

Michelangelo said that he saw the statue when he picked out marble from the quarry. Then he would get to work releasing it from the marble.

I was stuck in the helplessness of childhood. That brand of innocence is actually a bit on the narcissistic side.

I don’t know when the light bulb lit up over my head. It has been there for a while, that light bulb, waiting for the switch to be flipped. I’m not even sure what made me flip the switch. But it was a revelation:

I didn’t need to restore my innocence. I needed to embrace experience.

Experience, not guilt, is the flip side of innocence.

My early experience showed me that there is darkness as well as light in the human heart. Maturity has allowed me to see that the darkness of another’s heart wasn’t and isn’t about me, but rather experience stuck in the darkness of shame, humiliation, and refusal to let go of innocence.

Maybe that’s the villain in us—refusing experience, holding onto innocence. The hero in us embraces experience as life, our life, and weaves it into our story.

My fate is my story. The story that is my life, comprising innocence and experience, light and dark, joy and sorrow.

We each have our own life story.

Once upon a time I knitted. With emphasis on once.

I was 19. My grandmother knitted up a storm. She always had knitting needles, crochet hooks, or needle and thread in her hands. She hand stitched blouses right up until her death at 99.

So, when I was 19, I decided to knit. To make a scarf for my then boyfriend. This was a brief era when we (whoever “we” were) were trying to get back to the time before household appliances, TV dinners, and other labor-saving devices and products were introduced to make women feel okay about being sent back to housewifery after their “Rosie the Riveter” experience.

My grandmother showed me how to get started, but we never got around to the “casting off” part. I knew how to knit, but not how to stop. So I just stopped. I don’t know when the half-finished (if that) scarf with knitting needles attached disappeared—it just did.

Once upon a time, I almost experienced a tornado.

It was 2009, thirty years after I started my knitting “project.” I was in Iowa City for the Iowa Summer Writing Festival. The sirens started wailing on a Sunday evening as I walked to the first meeting for my class. The Mid Westerners strolled casually, while a woman from Seattle and I ran to the door of the first building, only to find it locked.

“The entrance is on the side,” someone said. Seattle woman and I trotted to the side of the building. I don’t know about her, but I was replaying all the disaster movies I had ever seen where those who can’t get in the locked door are doomed to be eaten by the monster, killed by the psycho, or swept away by the tornado.

That didn’t happen. Instead, I spent my first class meeting writing in the belowground floor of the natural sciences building, surrounded by glass-encased images of a giant grasshopper, the torso of an ape, and bird dioramas. An Iowa City resident tracked the oncoming tornado on her smart phone.

The tornado had touched down a few miles away.

I remembered seeing my Great Aunt Neet’s Blackwell, Oklahoma, house after it got struck by a tornado in 1955. I was five. She was my grandmother’s younger sister. Her husband had grabbed her and their daughter and a mattress, carried them with his will to the bathtub in the inner bathroom and pulled the mattress over them. As the tornado raged above them, my great aunt and her daughter prayed while my great uncle cursed. Apparently that covered all their bases. They survived intact, but I believe their roof ended up miles away.

Knitting was on my mind this past week. Along with the tornado in Oklahoma.

The week before I had gone to Sequim, our new home, to make sure we had an actual home to which our movers could deliver our belongings. On Thursday, I was treated once again to an evening with my friend’s knitting group.

They meet once a week to eat, drink wine, share their lives, and knit. It’s an excuse to get together, so not everyone knits each week. But they do eat, drink wine, and share their lives. Sometimes, they knit at a local restaurant or wine bar. Once they met at the bowling alley. All so they support local establishments. Sometimes, they leave knitted balls to let them know they have been knit-bombed.

For the first time, I understood the mindfulness of knitting. I understood that where I see a ball of yarn (or is it a skein?), those who knit see how it can be transformed—into a blanket, booties, a sweater, or a scarf. That was the missing piece for me—the transformation of yarn into three dimensions.

And underneath the transformation of yarn, was the knitting of relationships. Plans were made to form a work party to tend the yard of a woman who was absent because her husband was in the hospital. Compliments passed around for the homemade soup served by the hostess, the asparagus grown and fresh picked by a retired corporate executive, the rhubarb-blueberry crumble made from fresh-picked rhubarb. And so on.

It’s what I have come to refer to as “womaning up”—embracing what I thought of as things of the home—and transforming them into a three-dimensional world. Creating community. Being free of destructive female competition.

My grandmother never really freed herself from that competition. In part because she excelled at those things of the home. She made sure she did. But, because it was a competition, it left no room for things outside the home—like being concerned for those outside one’s extended family.

So for years, I thought I had to eschew things of the home.

Those teachers in Oklahoma who threw themselves on top of their students to protect them—they womaned up. As did those teachers at Sandy Hook Elementary School.

I said in an earlier post that I think it’s time to woman up. I think that womaning up—fusing things of the home with things outside of the home—holds the promise for our future as a nation, as a world.

Perhaps, in my new home, I will learn how to transform balls (or is it skeins?) of yarn into a scarf.

Those were the words of instruction on the Chucker package. A chucker is a long, bent piece of plastic with a claw on the end. It is designed for people like me who throw like a—well who can’t throw a ball more than 3 feet, but have a dog who’s fast and likes to run after the ball.

The first time I used it, the ball, instead of sailing gracefully down the dog park, landed one foot in front of me. Tessa (our dog) was not amused.

So I read the instructions. Something about winding up, lifting your arm straight, and then with a flick of the wrist the ball will sail down the dog park. The hint was: Let go before you think you should.

Well, of course. Let go before you think you should.

Letting go is actually pretty easy, I’ve learned. The difficulty is in discovering what it is I need to let go of.

Today, it has something to do with my Writing Shed. The actual shed. The place that became a place of refuge for me. A place where I wrote.

In about five weeks, I will be leaving it behind, turning it over to the new owners to do with it what they want.

I’m afraid I won’t be able to write without my Writing Shed.

It’s early in the morning. The birds have just started awakening, calling out to each other, perhaps battle cries as much as joyous greetings to the new day. A chicken bluck, bluck, blucks.

The arms of the butterfly bush flutter in the soft breeze at the edge of my Writing Shed. 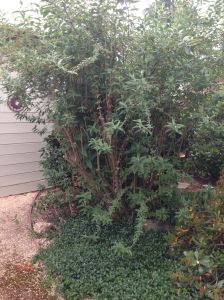 I planted the bush in honor of Ed, my high school teacher and mentor, who died nine months after we moved to Livermore. To the right of my Shed, a cat plays next to a pond—a fountain I bought shortly after Rug died. 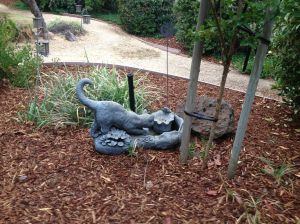 Rug, our bunny-soft-furred cat who was killed by a car three weeks before Ed died. And, of course, this is the shed that Gene built—Gene, my father-in-law. The man who called Tom Sweet Man when he was a little boy. Gene died three months after Rug and Ed.

My Writing Shed is a big part of the tapestry I wove while I was here in Livermore—the hometown I returned to.

As we prepare to leave, friends around us are experiencing major life events. One friend lost his brother to a grueling struggle with Parkinsons. Another learned he was going to be a father. This last weekend we attended the wedding of a friend who was widowed ten years ago, his heart mended by the grace of love.

We also learned that a writer who attended our salons had died suddenly of a massive heart attack. His widow thanked us all for listening to his words. I was grateful for the salons. Grateful that a writer had the opportunity to be heard.

I guess life really is a series of letting go, of knowing when a piece of the tapestry is complete—imperfection and all.

Writing this, I realize that I take my Writing Shed with me. It is a part of my tapestry. But, I don’t know what’s next, other than that we are moving to the North West in a few weeks. That is both exhilarating and scary.

Let go before you think you should.

I write about people, and monsters, and the spaces in-between.