Last week, as I approached the entrance to our sun room, there, not more than six feet in front of me, was a mama duck and her ducklings, fuzzy little ducks not yet ready to fly.

I had surprised her. As I fumbled for my iPhone to get a picture, she quickly gathered them under her wings, pushed them to a corner under the rhododendron bush, and marched towards me.

Yup. She marched. She didn’t waddle.

I backed up toward the door to my Writing Shed. She turned left, outstretched her wings, made a noise that sounded like a wounded bird, then did what looked like waddling while flying low to the ground, drawing me away. I followed her as she made her way through the yard, worried that perhaps she was wounded. She made for the Japanese maple tree surrounded by overgrown stuff.

In a stunningly Homer-Simpson-“doh!” moment, I realized that I needed to back off and give her space. I headed to our front porch and waited. She peeked around the bush, head held high. She saw me, let out a quack, then waddled back towards the sun room.

It was an impressive moment of maternal courage. I was in awe. I hope that her head-held-high quack was an indignant moment for her in which she understood that I had gotten the message—stay away from my children.

I managed to get photos of her and her ducklings as they headed away from the rhododendron bush to a more secure vegetative covering. At that point, I think she was at least convinced I wouldn’t kill them, but she might have been thinking, this picture better not end up on Facebook. 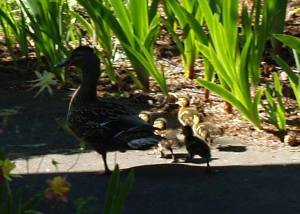 Later that day, as I drove down Third towards town, the goose family was crossing the road. This was an extended family of some sort. The goslings seemed to range in age from itty-bitty-but-able-to-waddle to adolescent-but-still fuzzy. The adult geese acted as sentinels, flanking their young as traffic stopped waiting for them to cross the road. Their necks stretched high, their heads turning once to let me know that they saw me.

Why did the geese cross the road?

So I could get pictures of them. I had plenty of time to whip out my iPhone as they herded the various members of the younger goslings. They weren’t in a hurry. They were determined, however, to get them all across the street safely.
Perhaps the head turning was to say, “These picture better not end up on Facebook.”

They did. And now, they’re on my blog.

These encounters with waterfowl made my day. I can’t even explain why. Or maybe I can.

It just seemed like moments when two species co-existed in the same space at the same time and worked it out.

This seems so fair to me.

I’ve been accused of being a bully recently, in an anonymous post in a comments section on a blog. I had commented on the blog because its author had taken credit for something I had done. When I pointed that out, the author rewrote history again, this time to make herself the victim of my comment.

The anonymous commenter (I believe this was a woman) pointed out that I had a chronic need for recognition and validation. Many, many people agreed with her on this point, as well as my bullying ways, she claimed.

Bullying is nasty. It’s the coward’s way of asserting power by humiliating another simply to gain a sense of power. I think there is a difference between that and standing up for oneself—holding someone accountable for her willful misrepresentation of history to make herself the star of a show she never even participated in.

I do have a chronic need for recognition and validation. Just like that duck and those geese, I believe it is my right to be recognized—to be seen—and to be validated—to have my right to exist in my own space to be respected.

So that’s it. I just figured out why that day was such a fair waterfowl day for me. The universe (as it were) gave me not one, but two opportunities to mess with another creature’s vulnerability. Neither the geese nor the duck were bullies. They were standing up to me and claiming what was theirs to protect and defend. Instead of messing with their vulnerability, I respected it as life expressing itself.

Being smart does not make a woman a bully. Asserting her right to recognition and validation is not a pathology.

I’m not a bully. I’m a strong, smart woman who feels entitled to defend and protect that which she created.

There, I feel better now.

Note: I drove by the geese later that week:

22 thoughts on “My Fair Waterfowl Day”