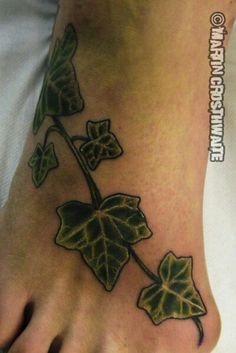 I noticed it, the way you notice—oh, a piece of spinach stuck between a person’s teeth.

​At first, I thought he had unwittingly picked it up when he passedan ivy-covered building. Maybe a it had detached itself from a vine and then stuck itself in his trouser cuff as he walked by.

​But then he removed his trousers and there it was. A vine dangled from the bottom of his Chinese-red silk boxer shorts.

This was—how shall I say it—out of the ordinary.

He turned his back to me and stepped out of his shorts.

And that’s when the peculiar marched right into the extraordinary—he had an ivy vine growing out of his ass.

One, long vine hanging straight down between his legs—from his ass to the floor. Its tendrils came alive, uncoiling, as if stretching themselves after being tightly packed inside the wool trousers and silk boxer shorts.

He folded the shorts carefully, placed them on the seat of the chairand turned to face me.

A tendril had wrapped itself around his . . . maleness.

I did not know what to say. Manners had been passed down to me by my grandmother: One must never draw attention to what might be out of the ordinary with regard to another’s appearance. Like the piece of toilet paper stuck to a shoe. Or a spot of mustard on a tie.

This vine, however, presented an unusual challenge for me.

Might not that tendril be problematic? Might it not cause him discomfort as he—how shall I say it—rises to the occasion?

I averted my eyes. My concern for his comfort wrestled with the voice of my grandmother,  “Never call attention to what might seem to be out of the ordinary with regard to another’s appearance, Dear.”

“Would you have scissors?” he asked.

I thought of the lovely gold-handled shears my grandmother had bequested me, sheathed in their monogrammed leather case, lined with red silk.

“Why, yes,” I said, glided to the dresser, and removed the silk and leather sheath from the top right drawer.

I offered them to him with open hands. Handle first. He eased the shears from their sheath.

“These are beautiful,” he said caressing the cool gold of the handle, stroking the shaft of the blades. “And whose initials are these, monogrammed on that beautiful leather case lined with silk?”

“Those are my grandmother’s,” I said, a slight blush coming over me, as if a veil had dropped, revealing me to him.

This was no ordinary man.

“Would you mind?” he asked grasping the shears by the pointed end and offering them to me, handle first.

Very carefully, I lifted him just enough that I could insert the tip of the opened shears around the tendril, but not in such a say that I could do damage to any of his delicate parts.

My grandmother appreciated quality. These were very good shears. With one snip, the vine fell from the tendril.

And with that he uncoiled the rouge tendril. Instead of flinging it to the floor, he carried it between his thumb and forefinger, and dropped it into the wicker basket that holds the cast offs of my poetic longings.

The warm flush of possibility swept over me.

Here was a man of good taste, excellent manners, and extraordinary consideration.

He lifted me, carried me to chaise, and lay me down gently.

His ivy vine came alive, its tendrils reaching out for me, coilingaround me, drawing me close, where they would never let go.

As he began his descent to my nether world, I could hear my grandmother whispering with approval,

“This is no ordinary man.”