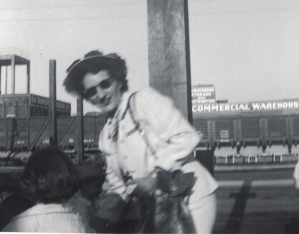 My mother just before boarding the train in Oklahoma City (July, 1955) that took her to New York City where she would start her journey to Saudi Arabia.

I revisited my mother’s charm bracelet recently. I don’t wear gold, so I’ve rarely worn it. It also has an emotional weight to it. It carries with it my mother’s conflict about herself as a woman and how that played itself out in her relationship with me, her only daughter. I have an older and younger brother. She came from a generation where the daughter’s needs get sacrificed to keep the peace in the family.

She gave me the bracelet some years before she died. I saw the silent, seething rage rise in my older brother when he asked her for it a few years later and she told him she had given it to me. He had expected he would get it to give to his wife. That led later that afternoon to his punching me. That was twenty years ago.

My mother died twelve years ago. She left all the rest of her jewelry to me. As my younger brother, his wife, and my niece (my older brother’s only daughter) sat around my dining table a day or two after her memorial, I sorted through the jewelry and shared pieces of it with them, saving a valuable ring I would send to my older brother’s wife. My niece let me know in no uncertain terms that she expected me to share the jewelry, that it would not have been fair for me to keep it all. My mother had once sacrificed me to her.

My mother and I were close, as long as my brothers were not close by. That’s when she would get conflicted, worry that our being close somehow took away from them. Or, that’s why I think she worried.

She was not conflicted, however, about leaving me her jewelry. I was her daughter. That’s why she left it to me.

Over the years since her death, I have had to distance myself from my brothers and their families. They have a particular view of who I am, one that fits within the daughters-sacrifice-themselves-for-the-family paradigm. To them, I became a monster when I stepped outside that paradigm. It was painful coming to that decision. It was far more painful to continue a relationship with people I love, but who consider me a monster for wanting to be a fully invested member of the family.

Families are complicated. And so, the bracelet had enormous weight to it.

It lives in a jewelry box in the top drawer of my dresser. I took it out recently as I considered selling it.

There is a charm on her bracelet for every country we visited as we traveled by ship and plane around the world. There are several that represent our time in Saudi Arabia, including one that she had made specially—a solid gold miniature still. It represented the still my father ran to make “hooch” while we lived there. Alcohol was officially forbidden, but during the Fifties, the King turned a blind eye to it so long as we kept it in the American compound—an island surrounded by a sea of Arab culture, its boundaries defined by a chain link fence.

As I held the bracelet, I recognized charms from countries we had visited as a family, others from her travels with my father after they retired, and then the ones she had accumulated when she traveled after my father’s death.

I remembered the day, about a year before she died from end-stage COPD, when she sat at my dining table, drinking the cappuccino I had made her (she loved my cappuccinos), a dark cloud coming over her as she said, “I won’t be able to travel anymore.”

I don’t remember what led her to say that. It wasn’t clear to me that it was true. But it was certainly what she felt. I think it was the first time I ever saw her depressed. “Don’t borrow trouble,” she had said more than once. Depression was not in her emotional tool kit. Yet there it was, though she did not dwell on it for long.

Memories get buried. That moment when she thought she could not travel anymore, and its impact on her, was such a memory. The bracelet unearthed it. As I held it, I understood  that my mother’s charm bracelet is her story.

She was born and raised in Oklahoma City, moved to California sometime during the War, and met my father shortly after it ended. They owned a restaurant called Hoagie’s for a while. But an employee offered to close it one night, took all the money, and left the food out to spoil. It bankrupted them. My father had a hard time finding work (he was an electrician), taking a job picking tomatoes once. He got an aching back, fifty cents, and a box of tomatoes he had helped himself to. “I’m never picking tomatoes again,” he told my mother.

Then he came home one day and said, “What would you think of moving to Saudi Arabia?” Why not, she responded, thus changing her story to the story that was truly hers.

To this day, I wonder how is it that in the Fifties, a woman who had been raised within the confines of Oklahoma, would so quickly and eagerly say, yes—let’s move to Saudi Arabia.

She flourished as an expat, took in the cultures of the countries we visited as we sailed for 75 days on a Dutch freighter, stopping at ports in the Far East as we made our way from Dammam, Saudi Arabia to Long Beach, California.

The “N” word was natural to her as she grew up. But, she told me her views changed when she learned, by living in Saudi Arabia, what it was to be a minority. She never used the word again. And, she embraced a world that was based on diversity, rather than certainty. In fact, she lusted after a world of diversity rather than of certainty.

That’s my mother’s story. Or, to be more accurate, that is Betty Jean Cole Hogan’s story—the story that has nothing to do with her as a mother. She gets to have that story.

She left it to me. Her daughter. The storyteller.

I am not going to sell the bracelet. 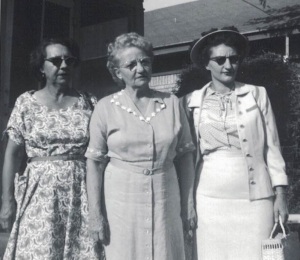 My Aunt Mayme, grandmother, and mother as they left the house to take us to the train station.

We flew from New York to Amsterdam, then to Rome, and finally to Saudi Arabia.

My mother (right) and her  friend Evelyn Ruberto outside our first house in Saudi Arabia.

Aboard the Wonosobo, the freighter that tooks us from Saudi Arabia to California.

My mother in our second house. They bought rattan furniture while we were in the Philipines, our last stop before we sailed through typhoons to get to Long Beach, California.

My parents hosted a hobo party. That’s her dancing with, I think, Jack Cavel.

I’m not sure how I even feel about the word “cunt.”

When I hear a man call a woman a cunt, I know he doesn’t mean as women have reclaimed it. It’s not just pejorative, it’s aggressive. Much like the aggression tRump displayed in the debates between him and Hillary Clinton. Not to mention his bragging about grabbing women by the pussy. Not to mention . . . well so much to report so little time.

So what about when a woman calls another woman a cunt?

I’m not sure that I ever have, but with all due respect (don’t you love how politely rude that expression is?) to Ivanka, Samantha Bee hit the nail on the head when she called her a feckless cunt. I particularly like that she qualified the word cunt with “feckless.” That shoe definitely fits.

I wrote a post on Facebook that I supported Samantha Bee because many of us women are enraged that women who have power play the mother card while condoning (at least by their inaction) the horror of children being torn from the arms of their mothers and fathers. These are mothers and fathers who are coming here to escape violence.

So forgive me if I don’t feel that calling Ivanka a cunt was vile. I think what is happening is vile and she is vile for doing nothing to stop it. I understand Samantha Bee’s rage:

“You know, Ivanka, that’s a beautiful photo of you and your child, but let me just say, one mother to another: Do something about your dad’s immigration practices, you feckless cunt! He listens to you!

“Put on something tight and low-cut and tell your father to fucking stop it.”

It’s time for women to woman up and apply our “mothering” nature to a world broader than snuggling with one’s own child. We need to take action so that the world cannot act as if one child is worthy, but the other is not.

I said at the beginning I’m not sure how I feel about the word cunt. But, here’s how I feel about Samantha Bee’s calling another woman a cunt: If Bee had simply called her a cunt it wouldn’t have resonated. That she calls her a feckless cunt—well, you know if that Ivanka-line shoe fits, wear it.

We need to stop the march into facism. It’s the facism that’s vile, and anyone who can stop it and doesn’t is vile and feckless.