To love another person is to see the face of God.

I remember the first time I saw Les Mis. I wasn’t expecting to like it, thought it was just another Broadway musical. But I became totally enthralled with it. I was already completely swept up in it when, as Jean Valjean is dying, the spirit of Fantine offers him her hand, assures him that his choosing love over fear made a difference. At the transcendent moment, Fantine, Eponine, and Valjean sing:

Take my hand
And lead me to salvation.
Take my love,
For love is everlating.
And remember,
The truth that was once spoken
To love another person
Is to see the face of God.

I didn’t know I had that many tears. I started to say that I totally lost it, but really, I totally gained it.

Yesterday, the California Supreme Court declared that fear transcends love. Declared that if your fear keeps you from loving another person, that you have the right to make that person illegal.

Sometime around 1982 or 1983, I wrote an article about the AIDs ward at San Francisco General Hospital for the hospice newsletter. By that time, I had been a hospice volunteer for two or three years. I was used to how a hospital worked.

What struck me about the AIDs ward (I think it was 5B) was that there was no room designated for staff. The room normally set aside so doctors and nurses could distance themselves from pain and death, was, instead, a place where staff and patients interacted in a casual manner.

They created a community.

The way they dealt with staff burnout was by recognizing that true patient care required an emotional commitment – to themselves as well as to the patient. Staff took care of themselves and each other by submitting to their emotions, and allowing themselves the time and space to tend to them. They supported each other, and when they needed a break, they took it

They allowed themselves to be healers.

The “authority” who designed the ward came from a nurse (now that is revolutionary in and of itself), a gay man. I don’t remember his name.

Towards the end of the interview, I asked him “What is homophobia?”

“It’s the irrational fear of homosexuality,” he responded.

He looked relieved that I asked it. “It’s fear of one’s own sexuality.”

That’s when I understood that to “come out” as being homosexual is not simple. It means that one has had to acknowledge that we are here for more than biological reasons. Sex is not only for reproduction, it is for connection. It is a vital part of our being.

And, the acknowledgment that we need connection – that we need to connect with someone who sees who we are and loves us for what is seen. And that makes us vulnerable.That, to me, is one of those moments when we realize that we live in a mortal body that requires attention because it is transitory. Its mortal nature makes for sacred moments.

It is the sacred in the profane.

To love another person is to see the face of god.

What disturbs me about the California Supreme Court’s decision is that it enables fear. It says that if enough people need the world to be defined by their fears, that their fear becomes the law of the land.

And that institutionalizes hate. It legitimizes fear of the other – gives someone the right to say “Just your being who you are threatens me, so I have the right to make you illegal.”

We have to stop using fear of the other as the connector.

I have been basking in the realization lately that I feel loved. In large part, this is because I have a lovely, wonderful husband who is loving. His father called him Sweetman when he was a child, and I can’t help but think that this nickname allowed the sweetness of his nature to inform the fierceness of his nature. He is no pushover, my husband. But there is a sweetness to his soul that is like nectar.

But, I don’t think I could be feeling this way if I had not recently thrown aside the image I had of myself as a monster. That monster, I have come to learn, is really nothing more than my willingness to change. Seeing that as a gift, instead of a curse, has brought me great peace. I have learned to love myself. And now that I know how it feels, it’s easier for me to recognize it when others give it to me.

So, today, look in the mirror. You’ll see the face of god.

And, then, let’s take compassion to the streets, the courts, the ballot box, your church if needs be, wherever we need to take it so that love of and compassion for being human, instead of fear of the other, becomes the foundation for the law of the land.

And in case you need proof that you’re loved, take a moment to enjoy this sunset from Mendocino: 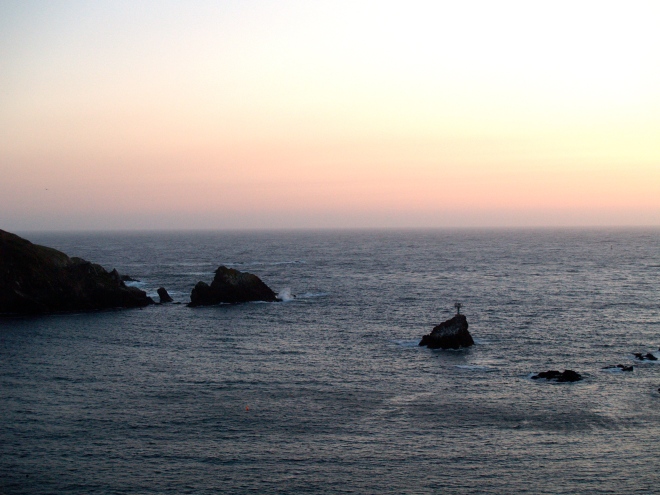 I write about monsters. Hidden Oaks Podcast, the Greenland Diaries, and much more.