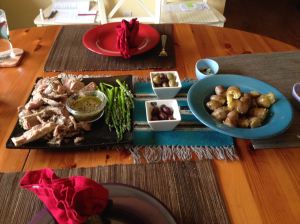 I inherited from my grandmother a dishtowel. I think she called them tea towels. It is illustrated with sparkling, smiling, strutting tea kettles, cups, saucers, creamers, and sugar bowls. It looks like a thirties or forties animated Disney version of what happens in your kitchen while the household sleeps.

“Kitchen Parade” is printed around the four edges of the red border that frames the parade.

I don’t use this tea towel. And I didn’t inherit it in the sense that it was written in her Will, “Give my granddaughter Karen the Kitchen on Parade tea towel.” It was more that I was there when my mom and I cleaned out her apartment and I knew I wanted to keep it. Like the Doll that Hid The Toilet paper—it was an iconic remnant of her life as the Domestic Dame she was.

What I kept of my mother’s domestic icon was the trivet that says, “My house is clean enough to be healthy and dirty enough to be happy.”

Then there was my mother’s sister, my Aunt Lucille, who, after sending my brother’s out to play after Thanksgiving dinner, told my cousin and I (we were 11) that we had to do the dishes (no dishwasher—greasy pots, pans, and dishes from a dinner for eight) because it was time to start getting used to the domestic drudgery that was our inheritance—our lot in life.

These three women formed a legacy of domesticity that was problematic for me—particularly that message from my aunt. It took me years to develop my own relationship with being a homemaker—to discover and embrace my voice, as it were, when it came to creating a home.

About three weeks ago, I bought a Shark vacuum cleaner—the Rocket. It’s awesome power in sucking up dust and the other detritus that accumulates from daily living is matched by its design. Without turning it off, I can detach the handle from the base and use it to suck up the stuff that lands in nooks and crannies, then reattach it to continue the sucking of the wider swaths of dust and detritus.

My grandmother had a state-of-the art thirties Hoover vacuum, that while powerful, was heavy and clunky and had a belt and bag that had to be replaced occasionally. You had to push the thing, sometimes with great effort, across a carpet.

Meanwhile, the Shark Rocket almost glides by itself. There is no bag to replace, and as far as I can tell, no belt. It is lightweight and compact. A well-designed tool for the task at hand.

The Shark helped me get through the weeks of terrifying uncertainty that started with a note about Tom’s high PSA count and ended with the course of treatment that has given us a sense of safety.

Cooking also got me through. I combined buttermilk and cream to make crème fraiche, made cinnamon ice cream laced with chopped pistachios, olive-oil poached tuna with olive and caper vinegarette, coq au vin, savory chicken, and leek and spinach soup topped with my homemade crème fraiche. Just to name a few.

I looked up a definition of cancer (because that’s what I do when a word overtakes me). The one that resonated was: an evil thing or condition that spreads destructively.

Home became the force against that evil thing. I wanted to make it a place that was nourishing, delicious, and free of detritus. A place that could banish the evil.

Homemaker. I embraced it.

Years ago, around the time that Jaws was in theaters scaring the peewadun (that’s my grandmother’s expression) out of audiences, I read about a skin diver in Tamales Bay who was paddling along on the surface when a great white shark came from below, grabbed him in its jaws, pulled him out of the water, shook him like a dog shakes a toy, then spat him out and swam away. The skin diver swam to shore. I believe he had only minor injuries if any at all.

I remember thinking at the time that that must have been a life-changing event for that skin diver—that there was the time before the shark, and the time after the shark.

From the moment that Tom got his PSA results until we heard the treatment plan, we were in the jaws of the shark. It spat us out when we got a plan for his treatment. This past week was the beginning of our after-the-shark life. A new normal now that we have been spat out.

Mortality is not only about recognizing our own lives have an end parenthesis, but about loving and the risk we take by loving—losing who we love. Grief is also the shark. It grabs us in its jaws without warning and holds unto us until it spits us out. Humans are famous for loving again after being in the jaws of grief. It is, perhaps, our greatest virtue.

Great white sharks became the villain that summer of Jaws. Everyone was interested in them. Sometime that summer, a great white shark (a baby one), was caught and sent to Steinhart Aquarium in San Francisco’s Golden Gate Park. It did not survive. Its body was put on display.

I visited the aquarium (this was when there was no entry fee). As people gathered around the body of this baby shark, I found myself feeling bad for it—that its dignity was being violated by the gawking curiosity. There was nothing villainous about it. It was just what it was. A being on the home we call Earth that was no longer a living being.

Someone somewhere wrote that humans aren’t learning to be spiritual, but rather spirits learning to be human. That’s what I believe. And that we become the most human when we are touched by our mortality—and that it is in our mortality that we find our immortality. Our lives are at the same time important because they are unique and a part of something larger than our individual lives. The grain of sand that makes the difference in the composition of the beach.

We find compassion through our mortality.

I want my country to embrace that compassion. To hold together the uniqueness of individuals while recognizing that we are a part of humanity, which is a grain of sand in the ecosystem that is the planet we inhabit.

Earth. Our home. We are its homemakers.

Note: I said in my last post that my cousin stayed home. It really was that she worked from home to change the world.

4 thoughts on “The Shark”