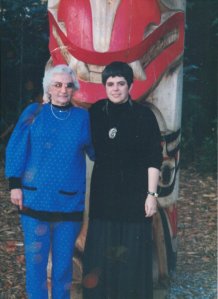 Mom and me, 1991 in front of the Haida totem pole in Sausalito

I couldn’t remember its name.

I called it the pink stuff because it tasted pink—not cotton-candy-bubble-gum pink. But rose unfolding pink. It tasted great with turkey and mashed potatoes and gravy and the warm spinach salad I made—a recipe I adapted from the Greens* cookbook. No hot bacon grease to wilt the spinach. Rather olive oil that had slowly been heated along with smashed garlic. Then there was the feta cheese and Greek olives and pine nuts.

We each were who we were with those dishes. Pink stuff and warm spinach salad.

My mother was not the cookies-baking-in-the-oven kind of mom. Though she loved cookies. And she loved crumbling saltine crackers into a glass of non-fat milk and eating it up with a spoon. It had to be non-fat milk, which had a blue cast to it. I referred to it as blue milk.

Whole milk she claimed was too rich. Blue milk was what she drank and crumbled saltine crackers into. During the last years of my father’s life, she shared her home with the stranger my father had become—a man who was disappearing into Alzheimer’s. I would visit and we would talk late at night as she spooned up the blue-milk-with-crumbled-saltine-crackers concoction. It brought her comfort.

She finally had to find him a home in a skilled nursing facility. It was a good one. But really, no one wants to end their days there. It’s kind of a waiting room where some go as they hover between what was their life, what has become their life, and where their days will end.

She taught me about loyalty.

My mother came as close to being a feminist as she could. She was encumbered by the teachings of her mother and the world she inhabited as a young woman.

That encumberance was often a grand canyon between us. Crossing that grand canyon took a leap of faith that she didn’t always have. I learned about that leap of faith from Jeanette and Sally, two older women I knew from my days with the Gray Panthers. We had great meals together. I learned new ideas for cooking from them, as they, by their presence and experience, gave me permission to womanup and be the woman I am.

But at holidays, it is my mother who visits my heart. It’s always unexpected, though it’s happened every year since she died.

For complicated reasons, I did not help clean out her apartment after she died. And so I did not get the recipe for the pink stuff. I know she used cherry Jello, cranberries, walnuts, and perhaps, cream cheese.

Though she did not completely embrace feminism, my mother would have voted for Hillary Clinton. She would have voted for her with gusto and been pissed, really, really pissed at the outcome. She knew about that grand canyon of limitations, even though she couldn’t take that leap of faith.

Is is almost fashionable to humiliate Hillary Clinton now for not becoming president—I will not use the word “lose.” Women have been humiliated throughout the history of our country when they have the audacity to leap over that grand canyon of limitations—limitations defined by tiny-hearted men and the women who depend on them for their power.

It took Russian intervention, Wikileaks, voter suppression, the FBI, and an antiquated institution that was incorporated into our country to protect slavery to keep her out of office. She wasn’t defeated. I say again, she won 3 million more votes than the man who represents the worst of what passes for manhood in our country.

For the sake of women like my mother who saw the grand canyon but could not leap, and for all the women who have been taking that leap throughout our history, it is time to stop abusing Hillary Clinton.

I don’t know why the pink stuff this year is mixed up with the betrayal that was this election. Perhaps it’s fear that all the work that has gone before was for naught. Even though she didn’t take the leap, my mother got to the precipice and wondered what could be. Without that, I might not have been able to take my own leap.

I’ve Googled and Googled, but to no avail. I cannot find the recipe that my mother turned into the pink stuff. I’ve come to accept that the absence of the pink stuff at my holiday table is out of respect for her. The dish missing from the table because it was her dish. Like her, it cannot be replaced or replicated.

*Greens is the Zen community vegetarian restaurant at Fort Mason in San Francisco.

4 thoughts on “The Pink Stuff”

writing about monsters lets me be myself