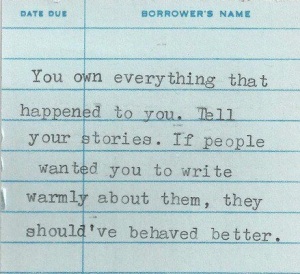 Both of my parents have died—my father 23 years ago and my mother 11. I am officially an orphan.

After my mother died, I was left bereft for several years. I like the word bereft. It sounds to me like it means. I see a solitary person in a rowboat in the middle of an ocean—the boat gently rocking.

I miss not having someone to check in with: to verify I remember what I remember, to find out what happened to that person, to uncover the secret that I sensed was real.

But, being an orphan has also given me my story—a story uncluttered with the expectations of what my parents hoped, wished, and dreamed would be my story.

A few years ago, in a box that had been stored in my mother’s house, I found an essay I had written that was part of an application for a local scholarship. I don’t remember anything about what I wrote. What I remember is how neat my penmanship was—no ambiguity created by the reader having to infer meaning from sloppily written words.

I don’t remember when my penmanship careened into the land of the indecipherable. Did it happen in one day? Over time?

This morning, I decided to be deliberate as I wrote, dredging up the muscle memory of how to form letters in cursive writing. The muscle memory took me back to then—fifty years ago. That’s how long it’s been since I graduated from high school.

I was on the committee that selected the theme song for our graduation, the one the choir would sing. It was between “You’ll Never Walk Alone” and “To Dream the Impossible Dream.” It’s fitting that we chose the impossible dream. It all seemed before us. Possibility.

But really, what I thought was that my goal was to marry. Take care of that and the rest would follow—that would be my destiny. It did not occur to me that I could shape my own.

Or, not consciously, anyway. Twice I married the wrong man. In retrospect, it was a way of rebelling against the notion of being a wife, while trying to satisfy that requirement—being married. Fortunately, third time was a charm.

And then I remembered there was that period of time, after my first marriage ended, when I gave away all my books. Did not keep a single one. What was that about? And then I took a class in basic grammar because I forgot that I knew how to write. Why did I forget that?

In 1976, I traveled alone to Europe. An eight-week trip. That’s when it came to me that I was a writer. I wrestled with that. I wasn’t married. Wasn’t I supposed to be? And weren’t women supposed to be wives and mothers first and everything else second?

I wrote by hand while smoking little cigars and drinking scotch. And I wore a beret and hung out in the Caffee Trieste in North Beach. I had stinky breath and got headaches from the scotch. The writing was my version of Michelangelo’s visits to the quarry to find the slab of marble that contained the statue.

I have been silent for a few months now. Not really knowing how to pen the words that expressed the abyss I was in—an abyss that started on November 9th, 2016. I won’t write his name. I can’t.

Apparently, when Al Gore got into George Bush’s territory during one of the 2000 debates, he was castigated by the media. There was not really even a peep about he-who-shall-not-be-named lurking menacingly around Hillary Clinton during the second debate last year. I knew how she felt. I think most women (if they are willing to admit it), know what it is like to be physically menaced by a man—in this case, one who we had learned two days previously that he bragged about sexually assaulting women.

She soldiered on during the debate. Remaining cool and calm. Putting on a good face. God, I’m tired of women having to do that. Look what happens when we do—we end up with the drunk, abusive father driving the car the wrong way on the freeway with the children in the front seat unrestrained by seat belts.

I don’t know what brought me out of the abyss. Perhaps it was deciding to persist. And from that came the muscle-memory of writing neatly by hand that unleashed those other memories—the memories that began with wanting to dream the impossible dream.

Caterpillars heed the call at some point, wrap themselves in a cocoon, and turn themselves into goo so they can transform into the butterfly. It’s called transformation. But they have the same DNA they had as a caterpillar.

I feel like that’s what I’ve been doing the past 10 months. Cocooning. Some caterpillars don’t make it through that phase. I’ll have to admit, I wondered if I would make it through this time. The landscape seemed a waste land and I couldn’t see my way around it. So I went through it. And I think I’m emerging from it now.

My DNA is the same as that of my younger self who believed in the impossible dream. But, I’m not that caterpillar anymore. My voice is stronger than it has ever been. I have no shame in it, using it to speak my truth, and insisting that it be heard.

And, I’m working on my handwriting. Making that cursive writing beautiful again. My muscle-memory voice.

I believe the quote about owning your story is attributed to Anne Lamott.

writing about monsters lets me be myself