There are many paths to choose from, and none of them go anywhere. Yet you must carefully choose which path you will take. 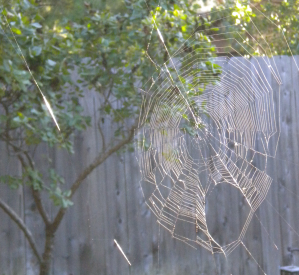 I found the phrase “life in the fast – and slow – lane” in my last book of morning pages. I wrote it about six weeks after my friend George died.

I’m not even sure why the phrase bubbled up again as I wrote this morning, but I think is has something to do with my wondering whether I should Twitter. As I look back at that last sentence, I realize that “should” is the word that dominates for me.

I heard recently that an agent said he would not even touch a writer who did not have a platform – platform comprising Facebook, a blog, and Twitter. For each, you have to have a following.

A friend of mine who Twitters told me recently that she had been off it for twelve hours and had already lost ground.

Oh, my. Or, as my old Irish grandmother would say, “Fook!” (I love the way the Irish pronounce fuck. It has all of the heft, but seems to lose some of the stigma attached to using the word.)

I was a technical writer for more than twenty-five years. I prided myself on learning technical concepts quickly and understanding how they applied to our daily lives. Twenty years ago, I worked for Hayes, the leading modem company at the time. Their new business purpose was to integrate telephone technology – which hadn’t progressed much since it was first introduced – into computer technology.

Now I have an iPhone. I can take a call, surf the Internet, and send an email simultaneously — though I don’t usually do that. My email can reach a recipient who lives half way across the globe within seconds.

This brings me back to Twitter. Remember that old telephone company ad that encouraged us to “Reach out and touch someone” with a phone call? How happy it made the receiver of the phone call to hear from the person who initiated the phone call?

I appreciate that Twitter technology has the potential to let us reach out and touch thousands of someones – with 140 characters or less.

What I want to do is tell story, so I wondered if one could do that in 140 characters or less. Then I remembered Ernest Hemingway’s famous six-word story:

Thirty-two characters, including spaces between words and line breaks.

I also remembered words that came to a friend on Twitter in which a woman described the emotional scene engendered by the mechanics of taking care of her father after an operation. “Over time,” she wrote, “this will be more graceful.”

I have never seen a more poignant description of that emotionally confusing moment when a parent has to relinquish the power of caretaker over to the child.

So one can tell a story in 140 characters or less. And that is an interesting challenge for a writer.

My problem is with the notion that I can’t be away from Twitter for twelve hours or I will lose ground – that the relationships I built through Twitter might not endure a twelve hour gap in attention. That seems more like a one-night stand than a connection to me.

But, for me, the important word is “connection.”

I’m definitely more of a face-to-face person. I like to have coffee or a meal with friends. For me, that is the grace of everyday living: taking the time to spend time with someone and letting the conversation take us wherever it leads.

I am at some kind of a crossroads at this moment. As I move into the world with my new story firmly implanted in my heart, I find that I come up against a wall. It isn’t a brick wall. It is a wall that insists that I answer the question, “What do you want to do with your time, with your life?” before it will let me pass.

I pulled the Komodo Dragon card this morning from the Animal Tarot deck. Dragons, it says are not to be slain, but to be tamed – to be tamed so we can use their fiery energy to benefit our creative souls. It is a part of the suit labeled Ancients.

The song “Danny Boy,” I read might have been written during the Irish Diaspora – that period of time when so many Irish left their homes for lands far away. Wake-like social events were held the nights before they departed. They were wake-like for in truth – their departure was like a death. Chances were they would never see their families again. A letter sent might arrive long after the recipient had died.

So I understand that technology can connect us. How much easier would it have been on them if they could have heard the voice of their loved one? Or received an email seconds after it was sent? Or even a 140-character-or-less Tweet sent by an Irish immigrant from Dublin, California that said something like:

I scrunch my toes into the green hill above my house and feel you beside me.

What I hope to accomplish with my stories is to write about those moments that give us an epiphany of what it is to be human – to understand that we are mortal, and that it is in our mortality that we find the purpose of our lives.

I want to live life in the fast lane that is the future, but to know when to switch to the slow lane – when to let ancient wisdom take the time it needs to ensure that I carefully choose the fast lane I merge into – the one that leads to a future that considers the seventh generation.

As I started writing this, I worried that my concern about Twittering means that I am a dinosaur. That the world is moving too fast, and that I am part of an irrelevant past.

I suspect that there is no answer to that. Since none of the paths go anywhere, I am just stuck with choosing carefully, the one I decide to take.